The Economics of Nuclear Energy

Within the next 25 or so years, all of the existing nuclear power plants will be at the end of their useful life.  With the advent of electric cars, the transition from petroleum-based power will be substantial.  Drivers in the United States logged 3.22 trillion miles in 2016.

Most electric cars use the equivalent electricity of 100 mpg compared to gas cars (called mpge, based on EPA’s estimate of 33.7 kWh per gallon of gasoline).  Let’s say 1.5 trillion miles are driven by electric cars in 25 years, the increase on the electrical production grid is (1.5 trillion miles divided by 100 mpge times 33.7 kWh per gallon) = 505 Billion kWh, an additional market of $65 billion dollars.  In other words, the capacity of the nuclear power must be roughly doubled while the existing plants are shutting down if no more gas or coal plants are to be constructed.

The market for next generation nuclear power plants in the next 25 years must then be at least 1 trillion kWh to keep pace.  At a cost of $5,000 per kWe , this becomes $5 trillion market.  This is $250 billion per year.  Even if Virginia was to control a tenth of that, the revenue per year in 10 years could be $25 billion.  Can we afford to turn down that level of economic development, especially with no tax incentives from the state necessary? 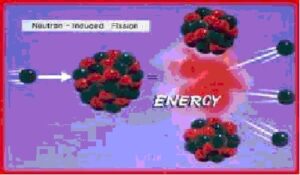 Nuclear power comes from splitting the nucleus of an atom. 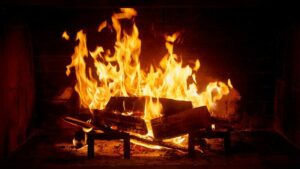 Most of us are used to getting energy that comes from outside the nucleus of an atom through changing energy states of the electrons that surround the atom. Examples are TNT explosions or burning gasoline or natural gas. This is called chemical energy.

However, when the nucleus of an atom splits (called nuclear fission) it releases about 1,000,000 times more energy PER EVENT than that released from each event of chemical energy

This is why nuclear power is extremely useful for producing energy. 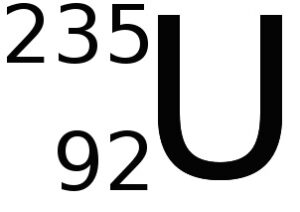 There are certain atoms that split easier than others.  Their names are Plutonium-239, Uranium-235, and Uranium-233.  That is why these atoms are used to build bombs and to make fuel for nuclear reactors.

Uranium-233 is in this class of “fissile nuclei”, but has not been used extensively because it releases more natural radiation than the other two. 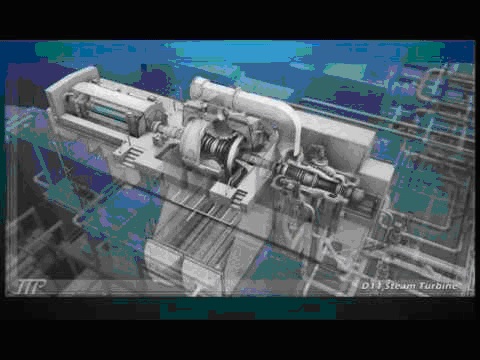 All electrical energy (except PV solar) is produced by turning a turbine. This creates a current that you know as electricity. This is how we get the electricity we use every day in our homes and businesses.
Coal, natural gas, solar thermal and nuclear all work by allowing steam created by heating water to turn the turbine. Hydroelectric plants use water pressure to directly turn the turbine.
It is important to note that when heat is used to produce steam to turn the turbines in a power plant, the only fundamental difference between different designs is the source of the heat.

These rods are lowered into the reactor core and, under the proper controlled conditions, the nuclei of the Uranium-235 begin to split. The fragments produced from the splitting action are called “fission products”. As a group, these fission products are highly radioactive. 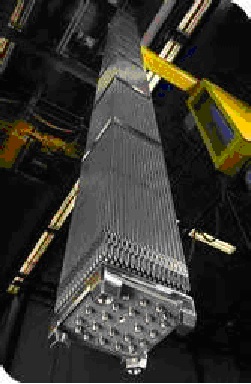 This process continues in a reactor for about 2 years until the percentage of Uranium-235 gets to about 1%. When this happens, it is time to get new fuel installed in the reactor core.

When the fuel assembly (containing the fuel rods) is removed from the reactor core, it is dangerously radioactive because so many Uranium-235 atoms (and some Plutonium-239 atoms) have split to produce electricity.

Therefore, it is necessary to keep people away from these spent fuel assemblies.

To do this, the used/spent fuel assemblies are “handled remotely”. This means that they are carried away from the reactor using cranes and other mechanisms while workers are shielded from the radiation. 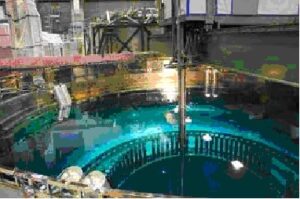 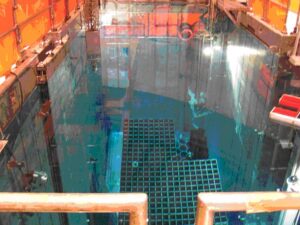 The first thing done with them is that they are lowered into water tanks that provide at least 30 feet of depth between the top of the assemblies and the surface. It turns out that this is enough water to prevent dangerous radiation from entering the work environment.

The water also circulates and is cooled to remove the heat generated by the escaping radiation.

After 5-10 years in the water tank (depending on the type of assembly), they must be removed to a more permanent disposal repository. At this point the radiation coming from the used/spent fuel assemblies is greatly reduced, but is still at a dangerous level.

Destiny of the Used/Spent Fuel

Originally, when nuclear reactors were first designed, the fuel was destined to be recycled using a technique called reprocessing. It turns out that 95% of the material in a nuclear fuel assembly does not even change. 3% is the split Uranium atoms called fission products. 1% is Plutonium-239 that was made in the reactor. The rest is other heavier than uranium atoms called “transuranics”. 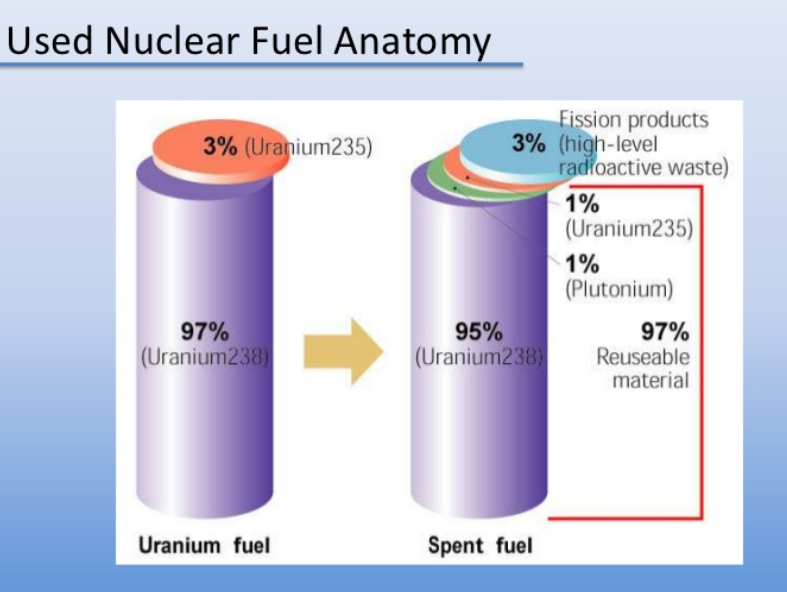 By far the most dangerous element in the spent fuel assembly is the 3% of the material that makes up the fission product inventory.

Right now, the used/spent fuel assemblies that leave the water tanks are placed in large concrete casks, sealed up, and placed in a semi-permanent storage system called “dry cask storage”.

This storage is maintained at each nuclear power plant at over 70 locations throughout the United States.

Yucca Mountain was designed to be the “permanent” repository for these used/spent fuel assemblies, however, because it is not open yet, the reactor sites have had to keep many more assemblies for a longer time (almost 20 year now) on their sites. 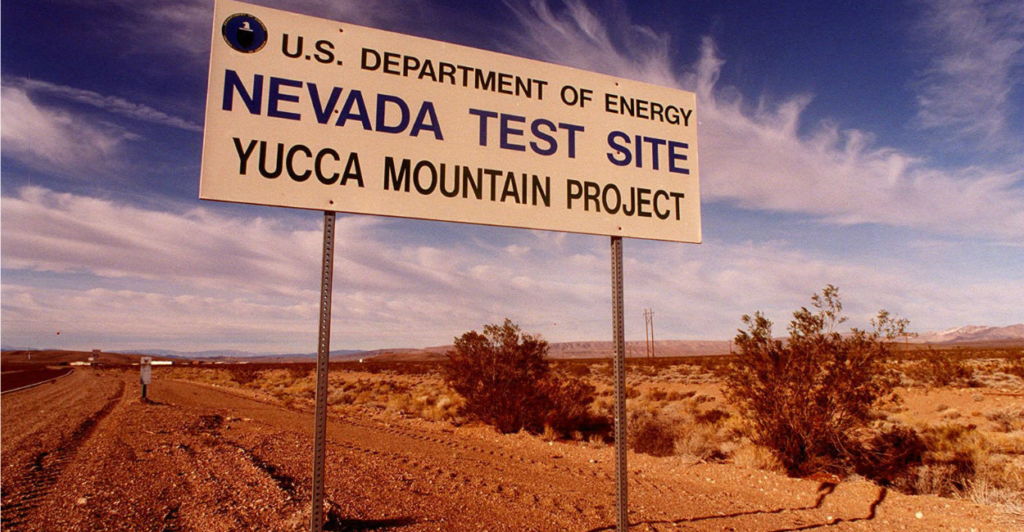 This is the situation we are in today.

1. Recycling makes more sense to the general public. After all, we are becoming a much more sensible society in this respect and they rightly perceive it as a much more palatable solution than “burying waste”

2. There are different ways to recycle UNF than the traditional chemistry method. With the advent of next generation reactors, many different fuel forms will be needed and a recycling program can be designed to accommodate all these business lines.

3. Proliferation is not really a concern with recycling. Commercial UNF does not contain a type of plutonium that is valuable for making atomic bombs (too much of the wrong plutonium). While it is possible, as proven by North Korea, it is much more beneficial to start from scratch and make the right kind in your own reactors.

4. Plutonium in UNF can be used as fuel. By making a fuel form called Mixed Oxide Fuel (MOX), we can burn up excess plutonium in UNF and our weapons inventory to produce energy. France has been doing that for years.

6. The US Government is desperate for a solution. The attitude for attaining a consent state is “a consent state defines what consent means” and they also define “what benefits they want”. Believe it or not, there will be competition in this arena before long.

7. Uranium is a valuable material. The current situation is that uranium is “plentiful and cheap”. However, only 5% of the uranium we use comes from the United States and the current administration is actively seeking tariffs to change this. Also with the increase in the number of reactors worldwide, uranium is becoming more and more valuable. Also, with transportation going all electric, much more carbon-free electricity will be needed. Why throw it away?

8. The cost for recycling is much less than burying. Again, contrary to intuition, burying is looking to cost $200 billion for a repository not big enough for all the UNF in the US. A recycling facility costs about $25 billion. More modern methods are looking to be much less.

10. Navy Nuclear fuel and depleted uranium can also be recycled. This opens up a large supply of energy with the option to supply fuel for at least two (some say eight) hundred years. It is all thanks to innovation from the last 30 years of American ingenuity.

11. Competition in the world scene. The rest of the world will need recycling, so the business can extend worldwide. Many more reactors are going in overseas, so, American ingenuity can lead the national scene as it did in many technologies of the past.

What Should be Done?

The current law in the United States provides for the used/spent fuel assemblies to be shipped to Yucca Mountain (about 90 miles north of Las Vegas), placed about 900 feet below the surface of the ground (under a mesa that is an additional 900 feet above the surface). The assemblies are to be kept there “forever”.

However, many scientists are asking why we cannot recycle the used/spent fuel assemblies as the original plan for nuclear power envisioned. Thanks to modern science, there are better ways than those that existed when nuclear power began in the 1950's. The current methods, though old, are still very effective and have been used in the United States to recycle early reactor fuel and have been used in France to recycle all their used/spent nuclear fuel, also for decades, without incident.

What do you think should be done?